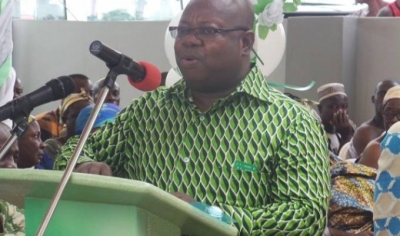 The Agricultural Development Bank (ADB) has initiated another move to consolidate its position as a truly agriculture inclined institution with a soon to be established special scheme called: “Funding for the Middle Class in Agriculture (FMCA).”

Speaking at the official opening of the new Dormaa-Ahenkro branch in the Brong Ahafo Region, Managing Director of the Bank, Dr. John Kofi Mensah, said the FMCA has been designed “to give a new face to the sector, complement government effort and create jobs for the unemployed youth.”

He said: “To push this innovation, at least one agriculture financing desk will be established in each region.”

The bank, he added, will soon institute a regular “Meet the Community Series” slated for every quarter by its branches across the country, to push its services closer to the people.

ADB has always been a consistent financier of agriculture in the country. Earlier this year, it announced over GH¢450 million in support of the implementation of the ‘Planting for Food and Jobs’ initiative.

Of the total amount, GH¢300 million was budgeted as credit facility to support viable projects in the agricultural value chain, whilst GH¢150 million was stated to support the Agric Ministry to meet payment requirements for inputs supplied to farmers under the programme.

In an interview with the B&FT, the Brong Ahafo Regional Chairman of Poultry Farmers Association, David Kwabena Ampofo, commended ADB for ‘its continuous support’ to agriculture, particularly the poultry subsector.

He however appealed to the bank to introduce more tailor-made products to cushion agricultural growth and review its interest rate to attract more players into its fold.